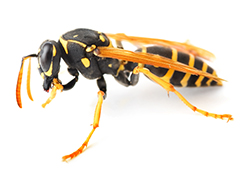 The northern paper wasp, is the native paper wasp of New England. It is found in a much larger area from Canada to Florida. It has been displaced by the introduced European paper wasp from coastal and urban areas over the last 35 years. Also known as the golden paper wasp, this species is blackish or dark brownish-red with transverse yellow bands on the abdomen. The facial patterns are highly variable. When in flight, their long slender legs dangle below their body. Their open nests are attached by a single thin stalk to an overhang. 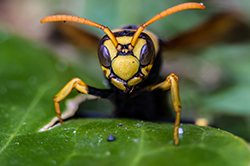 The European paper wasp “waist” is very thin. During flight, the hind pair of legs trail below in an extended fashion. The nest is the characteristic upside-down umbrella shape, and the open cells can be seen from below. Cream-colored larvae are legless and remain within their cells until they emerge as adult wasps.

Paper wasps mix saliva with fibers from dead plants, to use for constructing nests. The nests look like gray paper and have open combs with cells. Paper Wasps generally only attack if the nest is threatened. They feed on nectar and other insects. 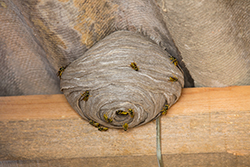 Northern paper wasps prefer to nest in forested areas where wood is available for building nests but it can be common in populated areas where many trees are planted. The mated queens often hibernate in attics and voids under the roof tops of buildings that are highest points on a hill. Large numbers of queens will re-appear and start new nests in the spring after searching out a suitable overhang. Nest combs are open, not surrounded by a cover of paper for protection. These wasps are not notable for aggression or stinging but will do so around their nest or in self defense.

Adults feed on nectar a main source of energy but they search out and bring back caterpillars, grasshoppers and other insects to feed to their young. At the end of the summer all of the workers, the queen and males die and only mated queens remain to over-winter. 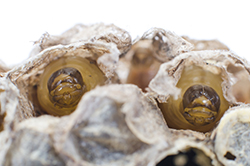 The fertilized queen European paper wasps from the previous year begin new colonies of each spring. These queens overwinter in protected areas such as under the bark of dead trees, in hollow trees, within wall voids of houses, under siding and occasionally within the cells of a paper wasp nest. The workers assume the duties of food collection, nest construction, and colony defense. With optimal temperatures and a plentiful food source, the larvae complete their development and become adult wasps in as little as 40 days.

European paper wasps create nests constructed in protected locations such as under and within the eaves of structures, in attics and wall voids, and in many other enclosed areas. Some of the more notable locations where nests have been encountered include exterior lighting fixtures, parking meters, animal skulls, bird boxes, and infrequently used equipment like gas grills, motor homes, boats, and autos. 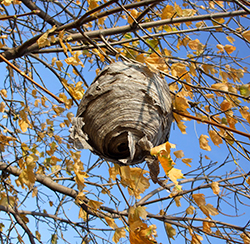 Wasps from several nests may be active in the same vicinity. When a single wasp finds food, it must return to the nest, share its food with the colony and then return to the food alone. Other wasps in the area may observe feeding by this individual and are then attracted to the immediate area by what scientists call social facilitation. When there are several wasps feeding, then even more wasps are attracted to the food.

Paper wasps are protective of their nests and will sting if disturbed. Individuals with known sensitivities to wasp and bee stings should have any nests close to their homes removed by professional pest management personnel (pest control companies). 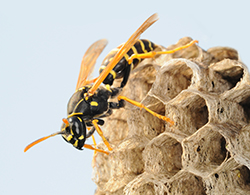 European paper wasps are very attentive to potential threats to their nests. They can detect movement at 12 to 20 feet from the nest but fortunately do not typically attack unless people are very close (inches away). However, since they prefer to hide their nests within voids and other enclosures, this behavior increases the risk for unpleasant encounters. An unsuspecting homeowner may be stung, for instance, while attempting to change a light bulb for an outside fixture, or while painting or removing window shutters.

Wasp venom wages a staged attack against the nervous system on a cellular level.

Or, Schedule an Appointment Online