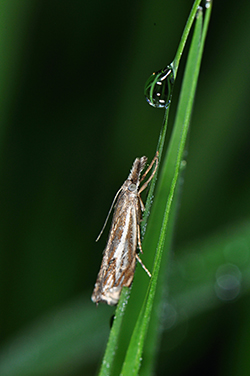 The adult Mediterranean flour moth is a pale-gray color and from one-forth to one-half inch long, with a wingspread of slightly less than one inch. The wings are marked with two indistinct, black zigzag lines. The hindwings are a dirty white. When at rest, the moth extends the forelegs which raises the head and gives the body a sloping appearance.

The Mediterranean Flour Moth can be found in many foods in addition to flour, grain residues, broken kernels and various whole grains. The female moth lays from 116 to 678 small white eggs in accumulations of flour, meal, waste grain, and other food sources. Commonly, the eggs are attached to the food.

Within a few days (three days at eighty to ninety degrees F) the eggs hatch into small whitish or pinkish larvae, with a very hard and dark colored head and small black spots on the body, that immediately begin to spin silken tubes. The larvae remain within the tubes until fully mature, which takes approximately forty days. 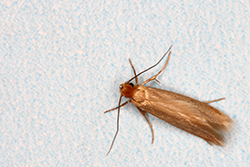 When fully grown, the larvae will leave the immediate area where they were feeding and wander about in search of a location to spin silken cocoons. Within the cocoons, they transform into reddish-brown pupae. After eight to twelve days the adult moths emerge. During very warm weather, the Mediterranean flour moth may complete its life cycle (egg to adult) in five to seven weeks.

Although the Mediterranean flour moth is not as serious a pest as the Indian meal moth and some of the grain infesting beetles, it still causes clogging of machinery with its webbing, and at times causes grain mill shut-downs.