The German cockroach is a widely distributed urban pest. It is also the most common cockroach species in houses, apartments, restaurants, hotels, and other institutions. 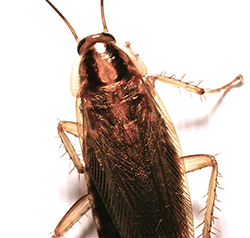 Adult German cockroaches are 1/2 to 5/8 inch long and tan to light brown. Although they have fully developed wings, they do not fly. Nymphs are similar in appearance to adults except that they are smaller and lack wings. The German cockroach is best identified by its small size and by two dark parallel lines running from the back of the head to the wings. 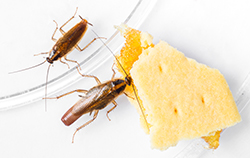 The German cockroach is usually found in kitchens (near dishwashers, stoves, and sinks) and in bathrooms of homes. German cockroaches usually prefer a moist environment with a relatively high degree of warmth. The insects are mostly scavengers and will feed on a wide variety of foods. They are especially fond of starches, sweets, grease, and meat products.

In many locations, garbage is a principal food source. As with other species, German cockroaches are mostly active at night, when they forage for food, water, and mates. During the day they hide in cracks and crevices and other dark sites that provide a warm and humid environment. Their relatively wide, flat bodies enable them to move in and out of cracks and narrow openings with ease. 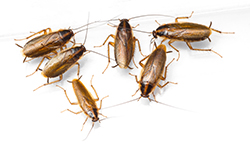 German cockroaches (eggs included), are “brought in”, usually on luggage, boxes or packages. All it takes, is bringing in one egg capsule, and six months later you have an infestation. German cockroaches produce a larger number of eggs per capsule and they undergo the shortest time from hatching until sexual maturity, resulting in a rapid population growth. A greater number of nymphs hatch successfully because the female carries the egg capsule during the entire time the embryos are developing within the eggs.

Also, and most importantly, German cockroaches are smaller than most other cockroaches and can conceal themselves in many places inaccessible to individuals of the larger species. Each capsule contains up to 48 eggs (usually 30 to 48), and adult females usually produce from four to eight egg capsules during their lifetime. At room temperature, one capsule is produced about every 6 weeks. In one year over 10,000 descendants can be produced, assuming two generations per year. 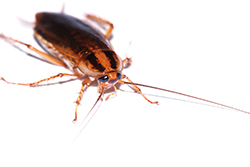 German cockroaches produce odorous secretions that can affect the flavor of various foods. When cockroach populations are high, these secretions may result in a characteristic odor in the general region of the infestation. Disease-producing organisms such as bacteria, protozoans, and viruses have been found on cockroach bodies.

Different forms of gastroenteritis (food poisoning, dysentery, diarrhea, and other illnesses) appear to be the principal diseases transmitted by German cockroaches. The organisms causing these diseases are carried on the legs and bodies of cockroaches and are deposited on food and utensils as the cockroaches forage. Cockroach excrement and cast skins also contain a number of allergens to which many people exhibit allergic responses, such as skin rashes, watery eyes and sneezing, congestion of nasal passages, and asthma.

The use of residual insecticidal sprays or aerosol foggers within a structure is of little value in controlling German cockroaches. In fact, these applications may disperse the cockroaches making control difficult and lengthy.